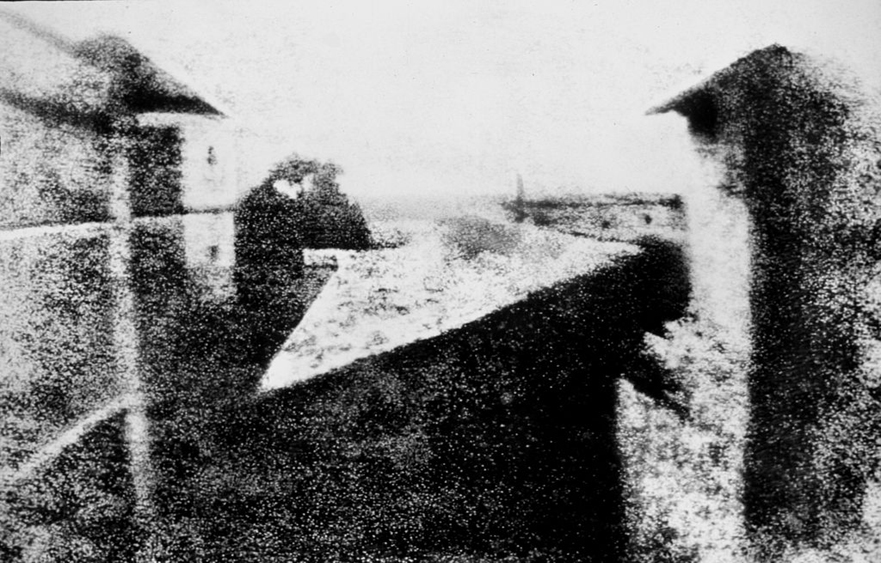 View from the Window at Le Gras is the oldest surviving camera photograph. It was created by French inventor Joseph Nicéphore Niépce in 1826 or 1827, and shows parts of the buildings and surrounding countryside of his estate, Le Gras.

The buildings and objects showing in the photo have long since disappeared. That’s to be expected after 187 years and multiple homeowners. And the window itself, as it turns out, had been moved 70 centimeters to the left to make way for a fireplace and chimney.

Niépce captured the scene with a camera obscura focused onto a 16.2 cm × 20.2 cm pewter plate thinly coated with Bitumen of Judea, a naturally occurring asphalt.

The bitumen hardened in the brightly lit areas, but in the dimly lit areas it remained soluble and could be washed away with a mixture of oil of lavender and white petroleum.

A very long exposure in the camera was required. Sunlight strikes the buildings on opposite sides, suggesting an exposure that lasted about eight hours, which has become the traditional estimate.