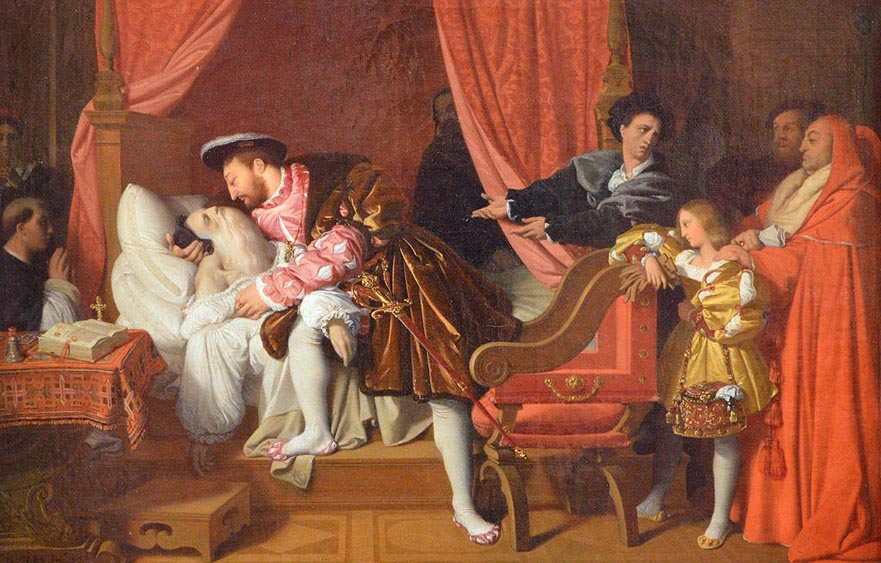 In 1516 at aged 64 Leonardo da Vinci left Rome and traveled through France, armed with his sketchbooks and three of his most famous paintings: Mona Lisa, The Virgin and Child, with St. Anne and St. John the Baptist.

Leonardo was invited by King Francis I to work at the Clos Lucé near the Château d’Amboise. Believed that he took the Mona Lisa with him and continued to work on it after he moved to France.

Despite the rumors that he would die in the king’s arms Leonardo da Vinci passed away in his room at the Clos Lucé on the 2 May 1519. He left his books, drawings, sketches and manuscripts to his beloved apprentice, Francesco Melzi.

Leonardo da Vinci had begun working on a portrait of Lisa del Giocondo, the model of the Mona Lisa, by October 1503. It is believed by some that the Mona Lisa was begun in 1503 or 1504 in Florence.

Although the Louvre states that it was painted between 1503 and 1506, art historian Martin Kemp says that there are some difficulties in confirming the dates with certainty. In addition, many Leonardo experts, such as Carlo Pedretti and Alessandro Vezzosi, are of the opinion that the painting is characteristic of Leonardo’s style in the final years of his life, post-1513.

Art historian Carmen C. Bambach has concluded that Leonardo probably continued refining the work until 1516 or 1517. Leonardo’s right hand was paralytic circa 1517, which may indicate why he left the Mona Lisa unfinished.