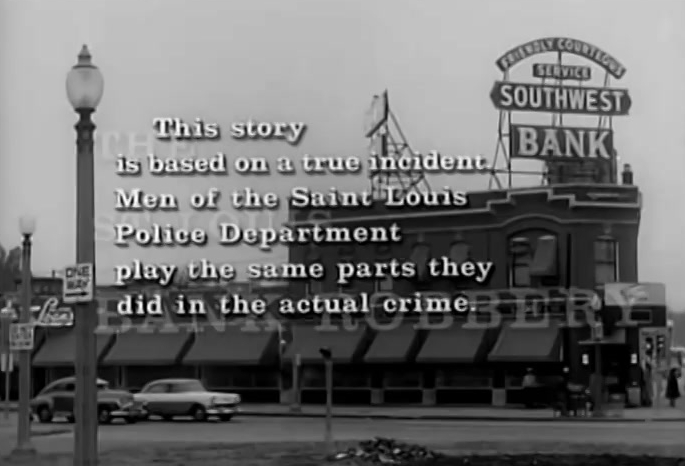 Based on a 1953 bank robbery attempt of Southwest Bank in St. Louis, the film was shot on location in 1958 with some of the men and women from the St. Louis Police Department, as well as local residents and bank employees, playing the same parts they did in the actual robbery attempt.The Great St. Louis Bank Robbery is a 1959 heist film, directed by Charles Guggenheim and starring Steve McQueen.

George Fowler (Steve McQueen) is introduced to a gang planning to rob a bank in St. Louis that they expect will have $100,000 on hand on an upcoming Friday. George is drawn into the plan as the gang’s driver by Gino (David Clarke), an old girlfriend’s older brother. As the gang goes about its planning, George and Gino have to find a way to live for the next two weeks and they turn to Gino’s sister, Ann, for help. George is hoping to go back to college and the money he would make would go a long way to helping him do that. Not trusting George to keep his nerve, the gang’s leader John Egan (Crahan Denton) moves him to the inside, but the robbery doesn’t go off as planned.