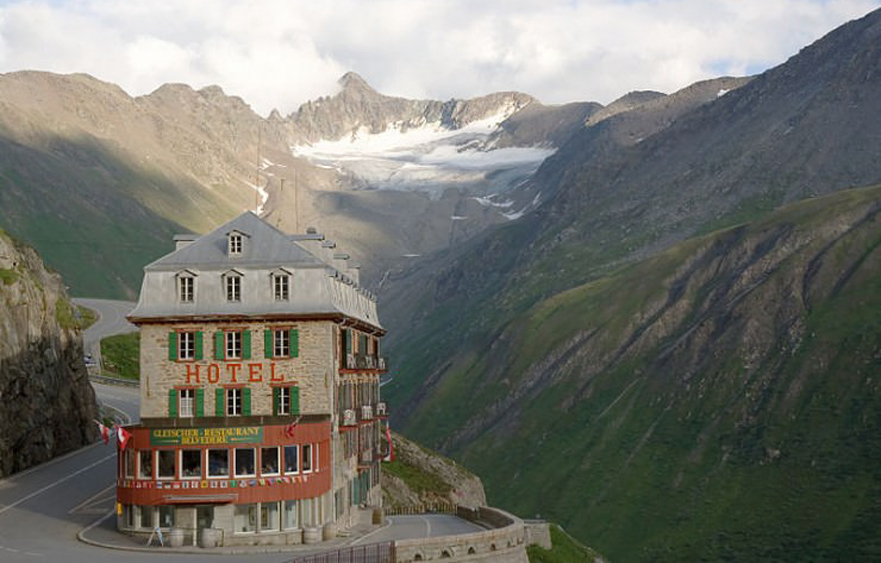 The Hotel was built in 1882 and was a popular attraction for the adventure-minded. Located in one of the snowiest regions in Switzerland, the Furka Pass, connecting the cantons of Uri and Valais in the country’s south-central region, is considered to be one of the “most iconic, exhilarating and exciting drives” through the Swiss Alps.

The building of Hotel Belvédère belongs to the last major wave of development that began in the whole of Switzerland in the 1880s. Over the decades Hotel Belvédère became one of the most iconic hotels of the Swiss Alps. Since the end of the 19th century, when the Furka Pass road was built, tourists have flocked to the hotel for its panoramic views over the icy landscape. The Rhone Glacier was once 180 meter walk from the hotel and a 300-foot long grotto carved into the glacier allowed guests to journey inside.

A couple of years ago, the hotel closed. Some speculate that the Glacier has retreated so much in the past years that it’s no longer an attraction.

Featured Image: The Belvedere Hotel in the Furka Pass of the Swiss Alps / Image: via pandotrip.com