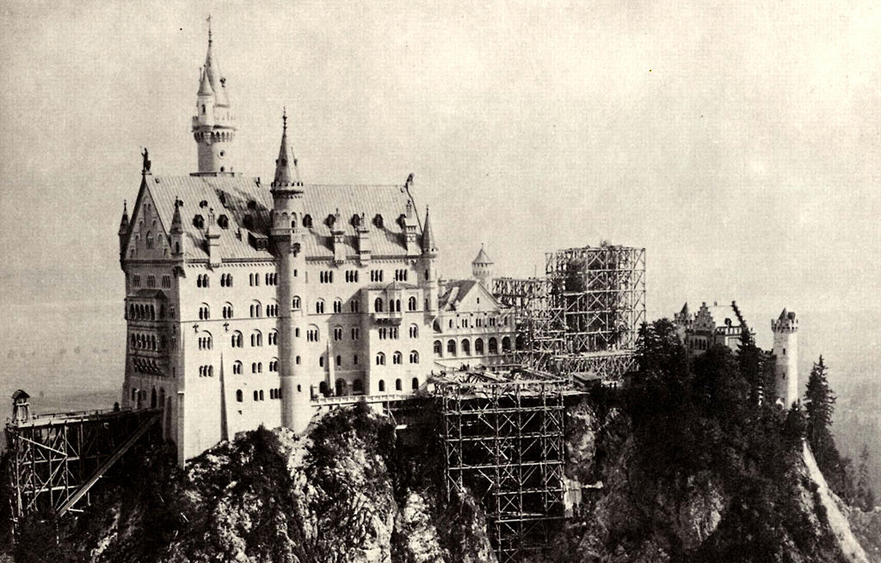 The Castle, is a 19th-century Romanesque Revival palace. The palace was commissioned by Ludwig II of Bavaria as a retreat and in honor of Richard Wagner. Ludwig paid for the palace out of his personal fortune and by means of extensive borrowing, rather than Bavarian public funds.

The castle was intended as a home for the king, until he died in 1886. The foundation stone for the palace was laid on 5 September 1869. At the end of 1882 it was completed and fully furnished, allowing Ludwig to take provisional lodgings there and observe the ongoing construction work. In 1884, the king was able to move in to the new building. In the end, Ludwig II lived in the palace for a total of only 172 days.

The palace was erected as a conventional brick construction and later encased in various types of rock. The white limestone used for the fronts came from a nearby quarry. The sandstone bricks for the portals and bay windows came from Schlaitdorf in Württemberg. Marble from Untersberg near Salzburg was used for the windows, the arch ribs, the columns and the capitals.

Neuschwanstein Castle consists of several individual structures which were erected over a length of 150 meters on the top of a cliff ridge. The elongate building is furnished with numerous towers, ornamental turrets, gables, balconies, pinnacles and sculptures.