Vardzia – The cave monastery in Gogasheni 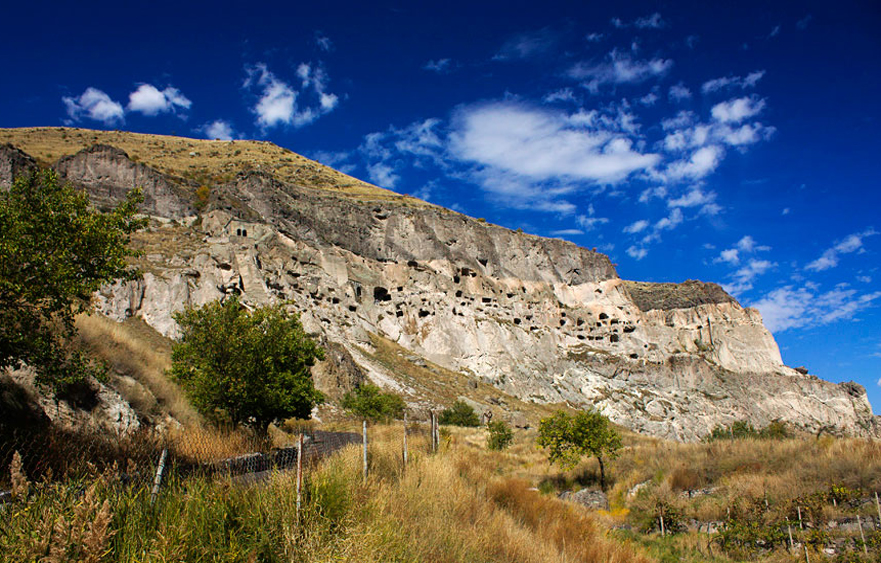 Vardzia – The cave monastery in Gogasheni

The main period of construction was the second half of the twelfth century. The caves stretch along the cliff for some five hundred meters and in up to nineteen tiers.

Vardzia is divided into an eastern and a western part. In the eastern part of the complex are around 80 separate cave dwellings, in eight tiers, including six chapels, a meeting room, pharmacy and wine cellars.

In the western part, between the bell tower and the main church, are a further forty houses, in thirteen tiers, including six chapels, bakery. Beyond the bell tower the complex rises to nineteen tiers, with steps leading to a cemetery. Infrastructure includes access tunnels, water facilities, and provision for defense.

Four distinct building phases have been identified at Vardzia: the first during the reign of Giorgi III (1156–1184), when the site was laid out and the first cave dwellings excavated, the second between his death and the marriage of his successor Tamar in 1186, when the Church of the Dormition was carved out and decorated, the third from that date until the Battle of Basian c.1203, during which time many more dwellings as well as the defenses, water supply, and irrigation network were constructed while the fourth was a period of partial rebuilding after heavy damage in the earthquake of 1283.