Schloss Johannisburg – Τhe square palace by the river in Aschaffenburg 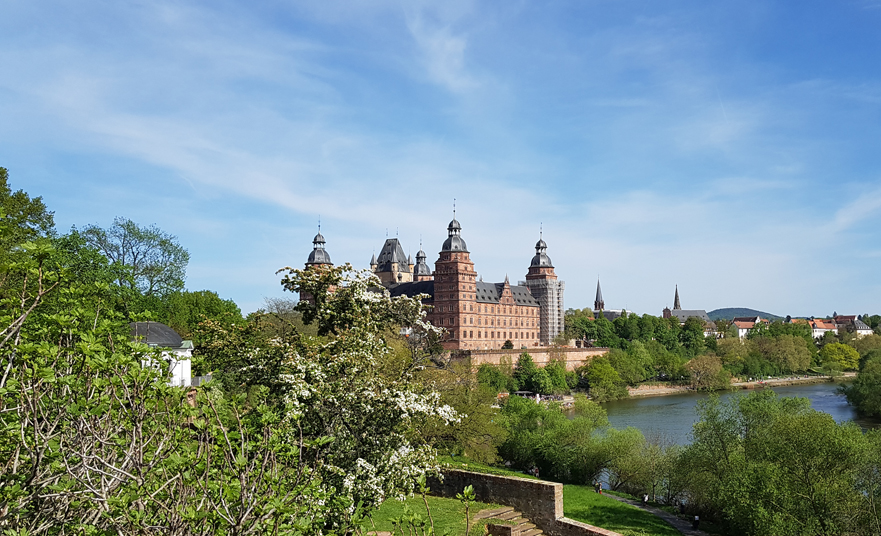 Schloss Johannisburg – Τhe square palace by the river in Aschaffenburg

The palace was erected between 1605 and 1614 by the architect Georg Ridinger for Johann Schweikhard von Kronberg, Archbishop of Mainz. A keep from the destroyed 14th-century castle that had formerly stood on the site was included in the construction and is the oldest part of the castle. The prior castle had been burned down along with most of the town on 10 August 1552 by the troops of Albert Alcibiades, Margrave of Brandenburg-Kulmbach.

The palace was nearly destroyed by US artillery in the closing days of World War II. Rebuilding started in 1951 and took more than twenty years.

Schloss Johannisburg is one of the few mostly symmetrical palace buildings of the German Renaissance. The castle sits on a terrace overlooking the river. The buildings have three floors. A tower is located on each the four corners, extending outward beyond the building line. From a square foundation the towers turn octagonal from the seventh floor upwards. The towers are topped by slate roofs with roof lanterns.

Schloss Johannisburg is open to the public and hosts museum, gallery of paintings, the palace chapel (with vestments from the former treasury of Mainz Cathedral), the residential rooms and the Municipal Palace Museum. There is also the world’s largest collection of architectural models made from cork, built by court confectioner Carl May and his son after 1792.

Featured Image: Schloss Johannisburg is a palace in the town of Aschaffenburg / Image: memolands.com