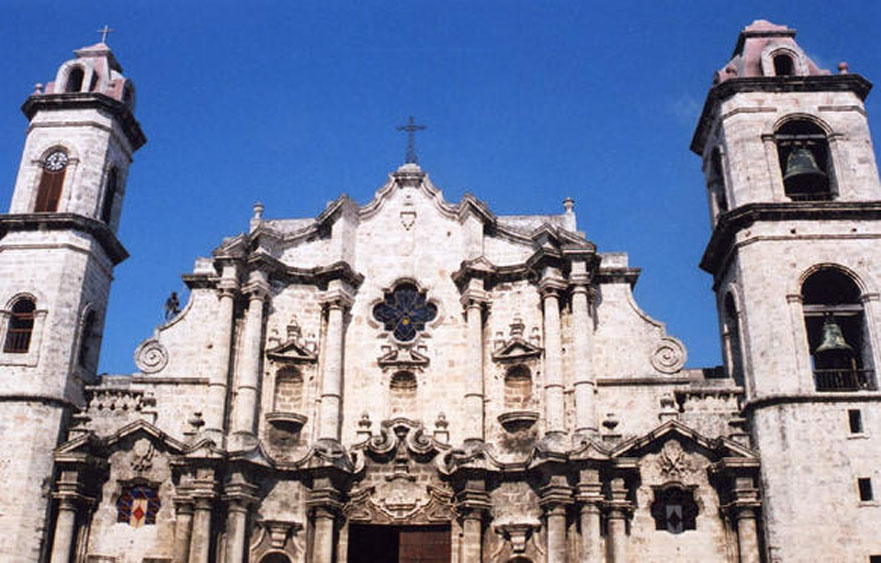 The cathedral is set in the former Plaza de La Ciénaga. In 1727 plans to build a church, convent and collegium were approved and the project began to take form. The plaza is located on the site of a swamp that was drained and used as a naval dockyard before the cathedral was built.

The Jesuits began construction of the cathedral in 1748 on the site of an earlier church and it was completed in 1777, well after King Carlos III expelled the Jesuits from the island in 1767.

The width of the central nave is fifteen meters and the plan forms a Latin cross. The Cathedral’s front elevation is Baroque with asymmetrical bell towers. One can see fossilized marine fauna and flora in the stone walls as the Cathedral is, as many buildings in Havana are, constructed out of blocks of coral.

It has a central nave, two side aisles and eight side chapels. The central arches of the nave are buttressed by eight stone flying arches located above the side aisles on the exterior of the cathedral. The flying arches, the dome over the transept or the orange roof tiles cannot be seen from the square.

Catedral de San Cristobal is one of eleven Catholic cathedrals on the island. The thirty by forty-nine meters rectangular church serves as the seat of the Roman Catholic Archdiocese of San Cristobal de la Habana.