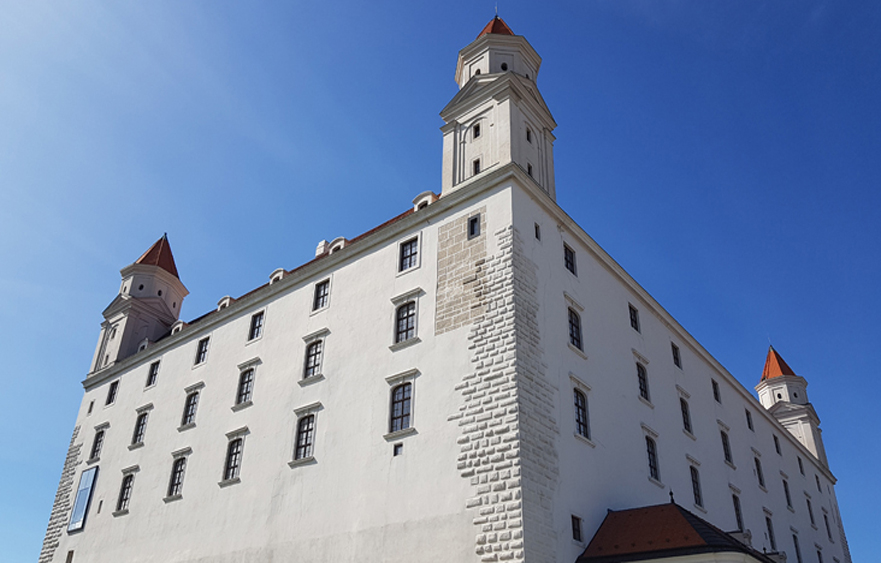 The castle’s site, like today’s city, has been inhabited for thousands of years, because it is strategically located in the center of Europe at an important ford used to cross the Danube river, and at an important crossing of central European ancient trade routes running from the Balkans or the Adriatic Sea to the Rhine river or the Baltic Sea, the most important route being the Amber Route.

During the Great Moravian Empire, Slavs built a fortress that became a significant center for the time. In the 10th century, Bratislava became an integral part of the growing Hungarian state, a stone palace and the church of St Saviour and its chapter were built on the castle hill in the 11th century. In the 15th century, in the reign of Sigismund of Luxembourg, a castle was built in Gothic style as an anti-Hussite fortress. During this period, a new entrance to the castle was built on the eastern side – Sigismund’s Gate – while 7-metre-thick fortifications were constructed on the western side, and a castle well dug in 1437.

In the 16th century, King Ferdinand ordered the rebuilding of the castle in the Renaissance style, while in the 17th century, when the castle became the seat of hereditary provincial chief, Pálffy, it was rebuilt in the baroque style. In the reign of Maria Theresa, the castle was arranged according to the needs of her son-in-law Albert, governor of Saxony and Tessen.

The castle building includes four towers and a courtyard with a 80 meter deep water well. The largest and tallest tower is the Crown Tower on the southwest corner. The 46.93 meter tower dates from the 13th century and for approximately 200 years beginning in the mid-1500s housed the crown jewels of Hungary. The exterior walls and inside corridors contain fragments of old Gothic and Renaissance construction elements. The walled-up entrance gate from the 16th century is still visible.

Since independence, the castle has served as a representative venue for the Slovak Parliament and houses collections of the Slovak National Museum.