Alcázar of Segovia – The Fortress of the Kings in Segovia 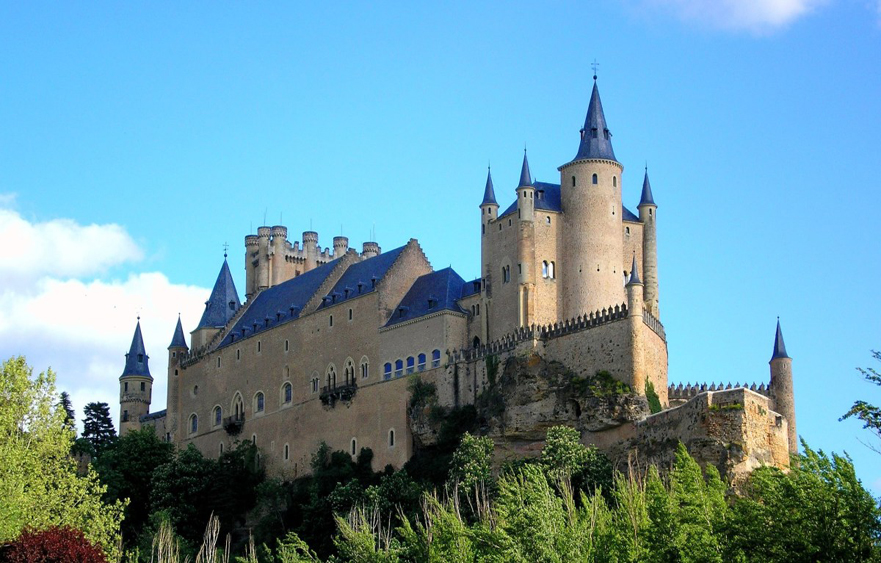 Alcázar of Segovia – The Fortress of the Kings in Segovia

A medieval alcázar rising out on a rocky crag above the confluence of two rivers near the Guadarrama mountains, it is one of the most distinctive castle-palaces in Spain by virtue of its shape. The Alcázar was originally built as a fortress but has served as a royal palace, a state prison, a Royal Artillery College and a military academy.

The first reference was in 1120, the shape and form of the Alcázar was not known until the reign of King Alfonso VIII (1155–1214), however early documentation mentioned a wooden stockade fence.  Alfonso VIII and his wife, Eleanor of England, made this alcázar their principal residence and much work was carried out to erect the beginnings of the stone fortification we see today.

The exterior of the castle has a courtyard, moat, drawbridge and the keep. The interior rooms include a chapel and several noble rooms.

Its plan is very irregular and adapts to the hill on which it rises. Highlights are the very beautiful keep, the square with four towers, the hall covered with pointed barrel and twin windows. It was raised by the king John II of Castile and at first served as a Weapons room.

In the interior, the halls and rooms were decorated with great luxury and beauty by Mudéjar painters and artists. Currently, it houses an Armory Museum and the General Military Archive of Segovia, the oldest historical archive of the Spanish Armed Forces.