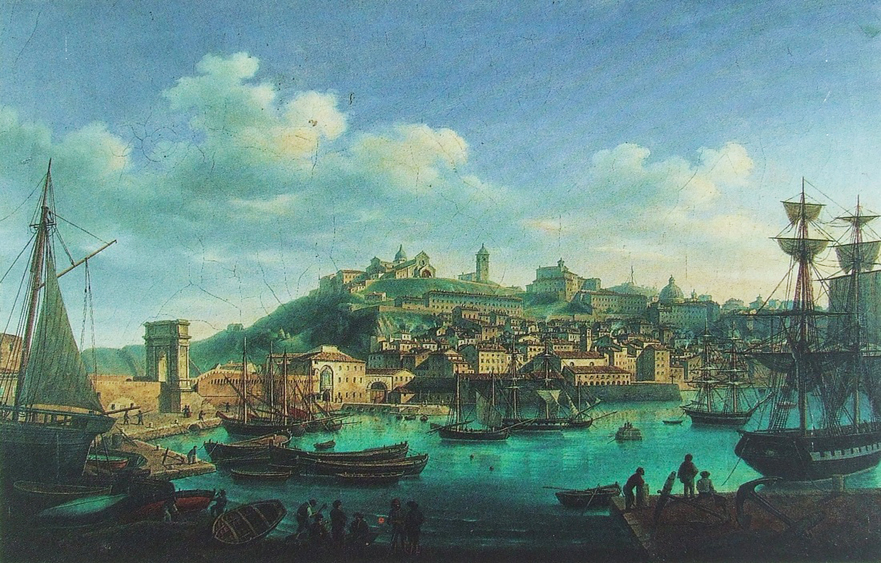 The gulf of Ancona, situated between two hills, has been a safe shelter for sailors since 16th century BC. Archeological findings from Mycenaean Era were recovered in the area, testifying commercial trades with Greece since 13th century BC. Ancona was populated as a region by Picentes (population of Picenum, on the northern Adriatic) since 6th century BC who also developed a small town there. Finally the Dorians settled into the port and in the surrounding territory. They founded the city naming it Ankòn, which in Greek means elbow (relating to the promontory protecting the gulf), without having any conflict with the local population.

In the beginning the Dorians built the first docks, while the Romans expanded them, completing the Greeks’ work. The Roman emperor Trajan in the 2nd century AD adjusted further expansions to the harbor, making it the starting point for the Dacian War. The senate of Ancona had the Trajan Arch built in honor of the emperor, which monumental ruins are still visible today.

In the 9th century, the city was almost destroyed along with the port by multiple Saracens attacks. After these episodes the harbor got fortified with stronger walls. High square-shaped towers, with access gates, used to protect the urban area. Protected by strong walls with twenty four towers, resembling a dyke in defense of the city.

Between the 13th and 14th century Ancona became one of the most important harbors in the Adriatic sea, second only to Venice, that managed to keep it from becoming independent, by submitting it to the control of the Papal State. From this period until the 18th century Ancona and its port gradually began to lose ground. The Pope Clement XII had several ruined docks rebuilt, and financed the construction of the Lazzaretto, a pentagonal building built on an artificial island as a quarantine station and leprosarium for the port town of Ancona. The building was commissioned by Pope Clement XII, designed by the architect Luigi Vanvitelli, and built from 1733−1743.

This peaceful period didn’t last for long as Ancona, like many other Italian cities, became an important revolutionary center during the Italian wars of Independence.

During WWII the city got badly damaged by bombs, that destroyed several neighborhoods and most of the port facilities. The only buildings that managed to avoid destruction were the Trajan Arch, Lazzaretto and a small part of the ancient city walls. After the war, with remarkable effort, began the reconstruction of the harbor and because of its strategic position in the Adriatic area, Ancona gradually managed to get back on its feet.