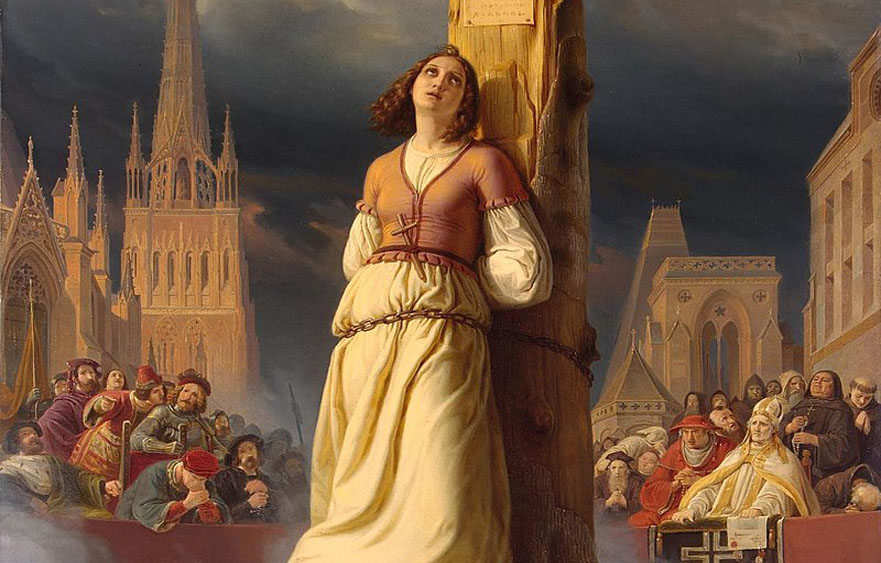 One of history’s greatest saints, and an enduring symbol of French unity. Joan claimed to have received visions instructing her to support Charles VII and recover France from English domination late in the Hundred Years’ War.

With no military training, Joan convinced the embattled crown prince Charles of Valois to allow her to lead a French army to the besieged city of Orléans, where it achieved a momentous victory over the English and their French allies, the Burgundians.

On 23 May 1430, she was captured at Compiègne by the Burgundians. She was later handed over to the English and put on trial by the pro-English bishop Pierre Cauchon. In the trial that followed, Joan was ordered to answer to charges against her, including witchcraft, heresy and dressing like a man.

On the morning of May 30, 1431, at the age of 19, Joan was taken to the old marketplace of Rouen and burned at the stake. They burned the body twice more, to reduce it to ashes and prevent any collection of relics, and cast her remains into the Seine River.

In 1456, an inquisitorial court examined the trial, debunked the charges against her, pronounced her innocent, and declared her a martyr. She was canonized in 1920. Joan of Arc is one of the nine secondary patron saints of France, along with Saint Denis, Saint Martin of Tours, Saint Louis, Saint Michael, Saint Rémi, Saint Petronilla, Saint Radegund and Saint Thérèse of Lisieux.